Hakkasan, opened in 2001 as a modern Cantonese restaurant in London. Since then, it has opened stores all over the world and offers a variety of dishes.

At the time of opening, there was no one who drinks wine while eating Chinese food at that time, but Christine was asked by Alan Yau, the founder of Hackasan Group, for a wine list, and the work was a great success. She has been working for 17 years until now.

The Hakkasan group restaurant features deep blue glass, a sophisticated interior with partitions and lattices that take advantage of the texture of heavy wood, and a space with the scent of incense. In addition, all uniforms are tailored by designers. 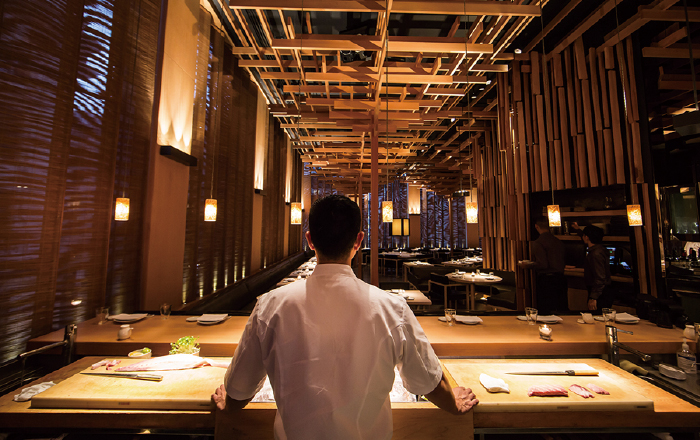 “In-house we train our staff on wine, sake and spirits, and we also have bartenders and sommeliers acquire international spirits. Besides, we also have service methods, sales skills, and we change the agenda every week and also train on various alcohols, “says Ms. Christine.

There are 25 types of sake in Hakkasan, 7 types in Yauatcha in the group, and 50 types in Sake no Hana. As for the product lineup, we purchase information at local tasting events and sake-related events, including cooperative importers, and because we serve as an IWC judge, we have many opportunities to learn about rare brands. It is said that it is increasing.

“We don’t suggest a marriage with a single dish because there are always several dishes on the table, but the staff needs to deepen their understanding, so we have a tasting party every Tuesday to make it compatible. I’m having an experience. “

Ms. Christine had been hoping that there would be an institution in London where he could learn sake. It seems that the joy was doubled when I learned that the event was decided and that the instructor had been interacting with and respected for a long time, Mr. Satomi Okubo (SSI INT’L official instructor / Enshu Limited representative).

“What’s very interesting about sake is its history. Before, I had little chance to know about the history of Japan itself. When I actually learned it, I found it to be a more fascinating world than I had imagined.”

I had the most difficulty in acquiring the qualification because of the large number of Japanese, but I was satisfied with the difficulty and gained solid knowledge, which greatly improved my skill in explaining sake to customers.