What is sake?
Sake is a fermented alcoholic beverage made from rice, koji (mold), and water, and it is produced by human wisdom while being a blessing of abundant nature. Sake is now also called “Japanese sake” with the meaning of “sake connects people”. We would like to tell the story of sake to people all over the world along with “Washoku” (Japanese food) registered as a World Intangible Cultural Heritage in 2013.

Sake unique to Japan has the following five cores.
1. Rice
Rice is the basis of Japanese food culture. Rice used for sake brewing is different from edible rice, and is made by growing special varieties using a special cultivation method, and is called sake rice. This rice suitable for sake brewing is said to be the most expensive raw material among the raw materials for sake in the world.。

2. Water
Approximately 80% of the ingredients of sake are water. Therefore, the quality of water has a great influence on the taste of sake. All breweries are located in an environment where good quality water can be secured, and sake can be said to be the pure sake of a clear stream country.

3. Fermentation
Fermented foods are indispensable for talking about Japanese food culture, and sake is also a fermented beverage that applies the functions of invisible microorganisms such as yeast and aspergillus.。

4. Climate
Local sake is produced according to the climate of each region and the tastes of local people. The rich variety of sake in each region is also the real pleasure of sake.

5. Passion and craftmanship of the Sake brewers
Sake is not something that can be left to nature. A craftsmanship of Sake brewers produces famous sake which is born with human thoughts and human skills.

Sake with a history over 2000 years
The origin is about 2000 years ago. Sake is a traditional Japanese sake that has been drunk since the Yayoi period. In the long history, a unique manufacturing method was devised according to the Japanese climate, and it evolved under the influence of culture and technology introduced from foreign countries. And due to changes in political background, environment, and people’s tastes, it has been handed down to the present day while changing. Unraveling the history of sake also means understanding the traditional culture of Japan and the aesthetic sense that the Japanese have cherished, that is, knowing Japan itself.

About Sake brewing
It’s exciting just to imagine how sake is made. Sake is a fermented alcoholic beverage made by applying the action of microorganisms. But it doesn’t come naturally. Sake brewers have handed down the technique for generations and improved the quality.

There are many types of sake, such as “Junmai,” “Honjozo,” “Ginjo,” “Daiginjo,” “Raw,” “Yamahai,” and “Unfiltered raw” etc. It will be difficult to choose casually. Furthermore, the taste of the same-type sake varies widely. So how can you choose the one you like? That’s where the “4 types of sake” come in handy.

In the early 1990s, the Sake Service Institute (SSI) decided to develop a selection index that would allow more consumers to enjoy sake. We conducted tasting verification of more than 20,000 types of sake and explored the tendency. As a result, sake has a combination of “aroma” and “taste” which discovered that it can be divided into the following 4 types. 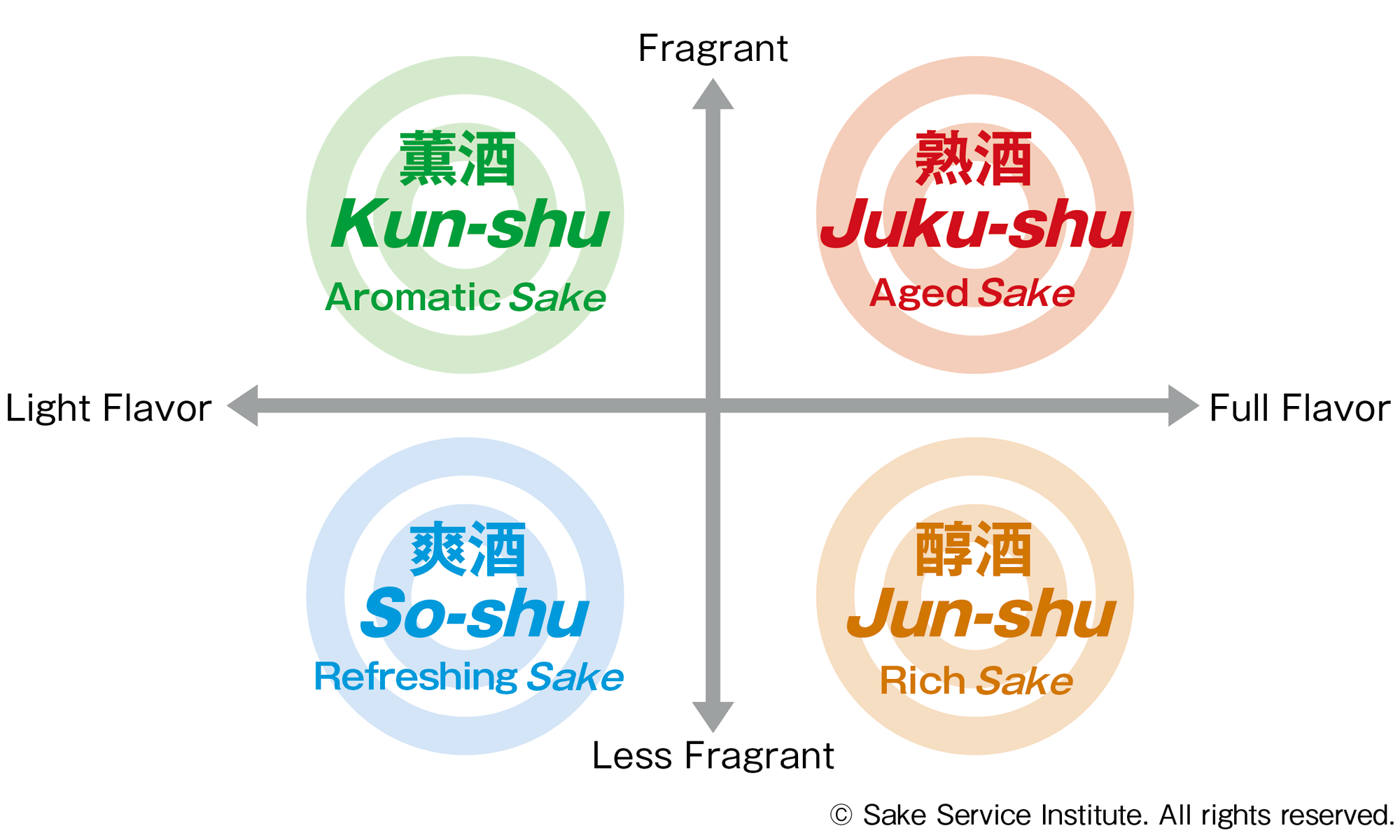 This is the “4 types of sake” that are currently used in various scenes such as many restaurants and liquor stores.The official name of this product is “Classification by flavor characteristics of sake (4 types)”, and it is also used in the curriculum of Sommelier of sake (International kikisake-shi). It is important for Sake tasting, service and sales promotion.

Advisor of Sake is indispensable

It is a lot of consumption to fully enjoy the charm of sake, such as suitable drinking methods due to the variety of flavors, pairing with dishes, and generally esoteric technical terms displayed on products. It is one of the most difficult alcoholic beverages for people to understand. For this reason, many consumers who have little experience in drinking sake have requested suggestions on “flavors according to taste,” “appropriate drinking temperature and sake set,” and “pairing with food.” There is a need for an advisor of Sake which is Sommelier of Sake (International kikisake-shi).

About Sommelier of Sake